Soul-Ship’s are specially modified Explorer vessels, that include the specially designed Infinity Matrix Columns, these are a form of Neural net that can hold the soul of a normal Soul mech, but whose influence spreads throughout the entire vessel, which effectively becomes the Soul Mechs new body.

Soul-Ship’s are exceptionally rare, and only ever found in the employ of some government, powerful corporation or power body, the Recipient who becomes the soul-ship, is always given rigorous testing and training and only exceptional candidates are accepted, mostly because the transition from an androgynous humanoid form to a non humanoid form, requires the ability to adapt and think in new ways. As such Soul-Ship’s are almost always paired with a living companion, as this is proven to keep them grounded and their “Humanity” intact, it also requires the ability to take the mass inflow of information without causing mental overload, this is something few have the natural ability to do.

The Soul-Ship are then effectively indentured servants of the group or power body that gave them the opportunity, many are given the opportunity after long terms of service to buy their freedom, but this is not required of the patron.

Soul Ships are not commercially available, the technology to make them exists only through powerful governments, or super rich mega corporations and the like as mentioned above. The Technology necessary to make the Infinity Matrix columns that are fitted into the Soul-Ships vesself form and the extensive conversions internally that are made to the vessels to allow the Soul-Ship to have total control and awareness of the form are a closely guarded secret of the Church of the Smith, and have never yet managed to be successfully replicated, and are only sold to governments and the like in very limited numbers for extortionate prices far out of the realms of even the richest players character.

A Soul-Ship has total control over it’s own form, from environmental controls, doors, engines, weapons, lifts, lights everything, all things are tied into the Soul-Ships control through the Infinity matrix column. It can as a result see inside itself at any point where there exists a camera (which is every compartment and all major corridors & lifts), other than these areas the Soul-Ship must investigate through it’s hands. But thanks to these internal sensors it can see and hear almost all activity aboard itself, providing a +5 bonus to Spot, Listen, Search and Read lips to determine anything appropriately tied to these skills which occurs in these places. It is considered polite for a Soul-Ship not to spy on it’s companion, and only look or listen in on its passengers if it has cause for concern, as such typical their viewers and sensors in these areas are kept switched off while occupied.

Base Form (Explorer)
The base form of a new Soul-Ship is the Explorer (Starfarer’s Handbook page 169), vessels later have the option to upgrade in lieu of other choices (see customisation below).

Requirements
To qualify to become a Soul-Ship, a character must fulfill all of the following criteria:
Feats: Technical Proficiency, Starship Piloting, Space Jockey,
Skills: Pilot 8 ranks, Navigate 8 ranks, Repair 4 ranks, Research 4 ranks, Use Device 4 ranks and any one Knowledge skill 2 ranks.
Special: Sponsorship by a Group/Faction/Religion/Business or Individual with the necessary resources, a Soul mech must also have a 16+ Intelligence, and a 12+ Wisdom & Charisma

Class Features
All the following are class features of the Soul-Ship prestige class:

Weapon and Armor Proficiency: A Soul-Ship is proficient with all high tech Simple and Martial weapons, including Starship weapons.

Remotes: A Soul-Ship has only limited ability to function outside of space, as such to give the Soul-Ship the ability to interact with it’s companion and others, they are given one small robot (although more may be purchased later), which they can directly control, as miniature extension of themselves called “ Hands”, these are very durable high tech small hovering disc shaped robots, with many features, and designed to allow them to be easily customised even further.

Note: “Hands” cannot hold any programming due to the memory requirements, and space required for the direct link remote operation components that allow the soul-ship to control them as parts of itself, as such if the soul-ship is incapacitated as are the “Hands”. Also if a “Hand” is destroyed the Soul-ship must make a Will save (DC15) or be rendered unconscious because of the neural backlash for 2d10 rounds, during this time both it and it’s remaining hands are vulnerable and unable to do anything. A Soul-Ship is able to control a maximum of 1 “Hand” for every 3 levels (total character levels, not class levels). Also for every hand controlled at any one time there is a cumulative –1 penalty to all Skill checks and Attack rolls, this reflects the Soul-Ships mental awareness being divided to operate the “ Hands” so only part of it’s total awareness is ever in effect through each hand.

Total Recall: The Soul-Ship gains the Total Recall FEAT free, this is a new feat (See below)

Self Diagnostics: The Soul-Ship is able to Determine problems to itself, by running a number of internal checks as well as using it’s own sensations to narrow down where and what the problems may be, as such he gains a +4 bonus to Repair checks upon itself.

Form Familiarity 1,2 and 3: Form Familiarity comes from the Soul mech finally becoming so familiar and used to the form that it’s is very agile, and gains some familiarity bonuses with the form; namely +5 speed, +1 acc, +1 dec, Hand +1, +1 AC Dex bonus for each level of Form Familiarity, bonuses are Cumulative.

Customisation: The Soul-Ship is occasionally awarded for loyal service with the option to customise their form in some unique fashion, or even take a new form. Whenever Customisation is given as an option the Soul-Ship may choose one benefit from the following list. Note: None of these customisations are available for sale normally, available only through the patrons who first provided the Soul-Ship conversion.

· Upgraded Form: (the Soul-Ships Infinity Matrix Column and hence the Soul-Ship are transferred to a new larger form, first time to a Corvette, second time to a Destroyer).

· Regenerative Hull: (the ships hull is replaced with a special living metal replacement, that has the ability to regenerate itself, growing back to seal breaches and repair damage, effectively providing the vessel Fast Healing 5. Note: This does not allow the vessel to repair system damage, nor propulsion, weapon or sensors which may get damaged or destroyed, these must still be replaced).

· Energy Shielding: (the ship has the ability to erect an energy field around it to protect it, which effectively provides 100 Phantom hit points for the vessel all damage done to the vessel comes off the shield first. Once a shield is destroyed it cannot be erected for 24 hours as it requires time to recharge).

· Cloaking Device: (the vessel is fixed with a cloaking device, these use an immense amount of power which is drawn from the vessels Farcaster, each use drains 1 charge from it. But while active the ship is effectively Invisible as per the spell, but lasts for upto 1 hour/level (as opposed to the usual 10 mins/level), note a cloaked vessel becomes visible the instant it fires).

· Fortified Hull: (the vessel is given a special reinforced hull and it’s infrastructure is given extra armouring and support, as such the vessel tends to be able to shrug off a lot more damage, this gives the vessel +20 hit points, and a 25% chance to ignore any critical inflicted against it. Note: The fortified hull makes the vessel less maneuverable –2 penalty to Handling, and –1 acc & dec).

· Improved Farcaster: (the vessel is installed with an improved Farcaster, these are specially designed and charged and provide 100 charges as opposed to the usual 50, they are also far more accurate providing a +5 bonus to the navigation roll). 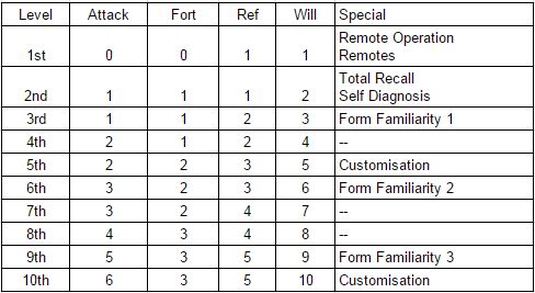 TOTAL RECALL (General)
You have a highly trained mneumonic capacity, providing an almost perfect ability to recall almost anything you have ever seen, read or done.
Prerequisites: Int 16+, Information Junkie
Benefit: The individual can attempt recall anything they have ever seen, heard or done with almost total accuracy. To do this the character can make a Gather Information roll against a Difficulty number which varies on the level of info the character seeks to recall. Simple info (name of a person met multiple times, name of a planet that is well known, name of your planets governor) DC10, Uncommon info (name of a person met once, the name of an Alien species once shown on a holo vid, the code to the security door you saw entered once or twice) DC 20, Obscure info (The name of a person you have only seen once at a distance, that book you read when you were 7, the account number you saw in the three seconds before you had to switch the computer off, the address of anyone whose address you have ever seen) DC 30+
Special: Obviously a character cannot use this feat to gain access to information they have never seen, done or heard, but if there is chance that the PC may have once seen, done or heard something about the subject apply a Dc to the chance of them recalling it and let them roll. This is a great way for PC’s to see if they can recall a pertinent adventure fact they may have forgotten.