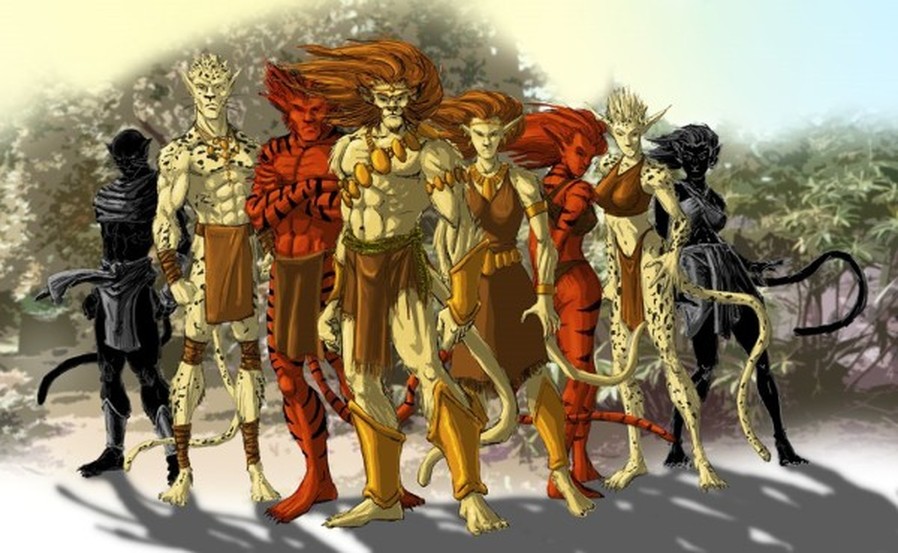 Catfolk maintain a tribal society similar to that of many nomadic human cultures.
Lands: Catfolk roam the open grasslands in temperate and tropical regions, shunning the colder lands even in the heights of summer. Wandering tribes of catfolk rarely come close to the large cities of other races, but they occasionally camp within sight of a smaller town or village in order to trade. Catfolk roam great distances in their travels and do not become attached to a specific range or territory the way that nomadic tribes of humans sometimes do.
Settlements: Catfolk encampments balance defensibility with ease of escape from a dangerous area. Generally circular in nature, catfolk encampments center on a communal area where children play and the elders care for them and practice their crafts. The tents and lean-tos of individual families range out from this center, with the most able warriors occupying tents on the perimeter of the encampment.
Power Groups: With no large nations or powerful alliance of tribes to bind them together, catfolk experience societies of other races. Instead, most tribes receive guidance from three sources: the outriders, the druids, and the chieftain. The outriders are the most skilled scouts of the tribe, and they govern the direction that the tribe hunts and travels, unless the chieftain overrules their choice. The druids, the primary source of healing and magical power within the society, hold a great deal of infl uence over most aspects of catfolk life and often advise the chieftain on important matters. The chieftain makes decisions on everything that affects the tribe as a whole.
Beliefs:' A deeply spiritual people, cat folk usually worship one deity to the exclusion of others. Most catfolk follow the precepts of Obad-Hai, and their most prominent religious fi gures are druids devoted to the service of the god of nature.
Catfolk revere Obad-Hai more for his connection to nature’s power and his governance of plants and animals than for his connection to the primary elemental forces such as fi re or water.
Other catfolk, particularly adventurers and travelers, pay homage to Fharlanghn. While most tribes of catfolk move around in a nomadic fashion, a few travel much more than others and keep Fharlanghn as their primary deity.
Relations: Catfolk get along well with members of just about every other race. They admire those who live in the wild more than city dwellers. Because of this, they seek out the company of halfl ings, wood elves, and gnolls.
Catfolk have a hard time understanding the slow, steady approach that dwarves take to life, and the two races have little in common. Because they are such opposites in both temperament and physical abilities, catfolk and dwarves rarely enjoy the other’s company, although no real animosity exists between the races.

Agile and charismatic, catfolk characters make excellent rogues and rangers.
Adventuring Catfolk: Adventuring catfolk feel the restlessness common to their people more acutely than most. The thrill of discovery and a great sense of curiosity drive these adventurers to break from their tribes and wander other lands. Beyond simple wanderlust, some catfolk fi nd the heat of combat exhilarating, and the rush of danger draws the catfolk adventurer ever onward.
Catfolk admire adventurers and see accomplished adventurers as great assets to the tribe. The nomadic life of the catfolk is fraught with danger and unexpected encounters, and the life of the typical catfolk is more akin to that of an adventurer than the life of a typical human or elf.
Character Development: Catfolk should select feats and skills that take advantage of their high Dexterity or mitigate the drawbacks of their +1 level adjustment. The easiest way to do this is through ranged combat—it turns the catfolk’s high Dexterity into a bonus on attack rolls and keeps the monsters at a distance, minimizing the catfolk’s lack of a Hit Die relative to other characters of the same ECL.
Character Names: Catfolk favor names that begin with “D,” “M,” or “N” and contain multiple “s” and “r” sounds. A catfolk clan name translates into Common as a participle (a verb made into an adjective by adding “-ing”) followed by a noun.
Male Names: Densharr, Mersharr, Nermissar, Therrass.
Female Names: Dessirris, Mianissa, Morasha, Nera, Thessana.
Clan Names: Flying Eagle, Hunting Tiger, Running Brook, Screaming Arrow.

Catfolk respond to the varied experiences of life with passion and emotional intensity. They accomplish as much in their quick but short-lived bursts of activity or emotion as other races do at their relatively plodding pace. Catfolk relish both the heated ferocity of battle and the warmth of a quiet meal with trusted companions.
Personality: Catfolk share a quick and engaging confidence that makes them seem always ready for the next challenge. Quick to anger and just as quick to forgive, catfolk live a life fi lled with emotion. Members of most races find catfolk pleasant company despite their mercurial temperaament, finding their free-flowing emotion and enjoyment of life refreshing and captivating. The emotional catfolk have a darker, dangerous side as well, and they are as likely to meet an insult with a drawn weapon as they are to shrug it off with a jest.
Roleplaying Application: Let your emotions come to the surface at every opportunity. When you form an opinion, express it. React passionately to most encounters, drawing weapons when a fight is eminent and offering welcome to those who seem friendly. Don’t be shy about criticizing the things you don’t like. Don’t be stingy with praise for those things you enjoy.
Behavior: Catfolk move in quick bursts of speed rather than in one steady gait. Even when covering long distances, they intersperse short dashes with short periods of rest. Members of other races find this style of movement almost impossible to emulate, but to catfolk it’s much less tiring than simply trudging on at a steady pace.
Catfolk also place great importance on small tokens that serve as physical connections to their memories, and they view these special tokens as having physiological importance if not true magical power. Adult catfolk carry several such tokens with them at all times, ranging from objects as large as weapons and armor that served well in past battles to items as subtle as a small brooch that the character wore on an important day in the past. For catfolk, this tradition is a deeply personal experience, and the highest compliment a catfolk can pay someone is to present one of his tokens as a gift and explain its significance.
Roleplaying Application: If you use miniatures while exploring a dungeon, you can represent your actions visually by moving a short distance ahead each time the group clusters or falling behind a bit as the group moves on and then catching up in a burst of speed. If you don’t use miniatures, or if you only use them during combat, emphasize the way you move by describing your movements as jumping or dashing rather than walking. Take the time to be clear about your character’s position relative to the rest of the party.
You should pick a minor token that has special meaning to you at least once a level. Although these tokens may sometimes be weapons or items that helped you or your companions through a trying battle, most should be simple items that others would never suspect hold such meaning. As a sign of great respect and friendship, you can present one of these items to another character or to an NPC, but you should do this at most every few levels. Such tokens might include the dagger a friend gave you a long time ago, the fletching from the arrow that killed the first game animal you took down, or a well-worn bowl that your grandfather carried with him on his adventures.
Language: Catfolk have their own language, which they use primarily for conversation with other members of their race. Regardless of whether they communicate in Feline, Common, or some other language, catfolk express their opinions quickly and expect others to do the same. Catfolk can listen to others patiently enough, but once they have expressed a clear opinion, they expect the conversation to come to a conclusion quickly. They have little time for those who attempt to persuade or debate by simply restating their opinion. They grow bored when others take a long time to reach a point or who view an exchange of opinions as a trial of endurance.
Roleplaying Application: Don’t debate—take the time to listen to others and then express your opinion or view. Only express your opinion once, but don’t be abrupt or blunt. Maintain an open attitude toward the thoughts of others. Express your emotions openly in conversations, magnifying most responses to represent greater heights of emotion.

Catfolk Infiltrator: Catfolk rogue 3; CR 4; Medium humanoid (catfolk); HD 3d6+3; hp 16; Init +4; Spd 40 ft.; AC 20, touch 14, flat-footed 16; Base Atk +2; Grp +4; Atk or Full Atk +5 melee (1d6+2/18–20, masterwork rapier) or +7 ranged (1d6+2/×3, masterwork composite shortbow); SA sneak attack +2d6; SQ evasion, low-light vision, trap sense +1, trapfinding; AL CG; SV Fort +3, Ref +8, Will +2; Str 14, Dex 19, Con 13, Int 12, Wis 10, Cha 10.
Skills and Feats: Climb +8, Jump +12, Disable Device +7, Hide +9, Listen +8, Move Silently +11, Open Lock +9, Spot +6, Search +7, Survival +0 (+2 following tracks); Dodge, Mobility.
Languages: Common, Feline, Gnoll.
Evasion (Ex): If a catfolk infiltrator is exposed to any effect that normally allows her to attempt a Reflex saving throw for half damage, she takes no damage with a successful saving throw. Sneak Attack (Ex): This catfolk infiltrator deals an extra 2d6 points of damage on any successful attack against flatfooted or flanked targets, or against a target that has been denied its Dexterity bonus for any reason. This damage also applies to ranged attacks against targets up to 30 feet away.
Creatures with concealment, creatures without discernible anatomies, and creatures immune to extra damage from critical hits are all immune to sneak attacks. A catfolk infiltrator may choose to deliver nonlethal damage with her sneak attack, but only when using a weapon designed for that purpose, such as a sap (blackjack).
Trapfinding (Ex): A catfolk infiltrator can find, disarm, or bypass traps with a DC of 20 or higher. She can use the Search skill to find, and the Disable Device skill to disarm, magic traps (DC 25 + the level of the spell used to create it). If her Disable Device result exceeds the trap’s DC by 10 or more, she discovers how to bypass the trap without triggering or disarming it.
Possessions: +1 studded leather, masterwork buckler, masterwork rapier, masterwork composite shortbow (+2 Str bonus) with 20 arrows, 5 silvered arrows, 5 cold iron arrows, cloak of resistance +1, potion of cure moderate wounds.

Adventures featuring catfolk are likely to focus on problems that the catfolk encounter while wandering the plains. The catfolk discover or confront any number of hazards through their nomadic lifestyle, and occasionally they require the help of adventurers to deal with them.
• While wandering, the Running Brook tribe discovered the ruins of an ancient citadel that long ago fell into a deep chasm. The ruined citadel is apparently dedicated to a dragon or a draconic cult, but the catfolk quickly moved from the area and know little else about the site.
• Samass-Sarral, a great circle of magical stones that many catfolk tribes regard as holy, has been recently plagued by undead. The time of an ancient rite nears, and the catfolk must clear the site of undead before the new moon.